A few years ago, I visited the National Aquarium in Baltimore, Maryland. My brother and I stood by the Blacktip Reef exhibit, and the tan and black dotted fins of the zebra shark caught my eye. It seemed to be blind, and we watched as it banged its head against the coral over and over again. Then, it would rest its belly on the bottom for minutes at a time, exhausted from its seemingly fruitless expedition. I thought it was the funniest thing to witness.

But when I turned to the information on the zebra shark, I learned that the shark does this to hunt for small fish and crustaceans hiding within the coral. It doesn’t need to swim to breathe so it rests on its belly in between hunting sessions.

Earlier today, I felt exhausted, too, from seemingly banging my head against the wall over and over again for the past seven months. I started to wonder if I was perpetually depressed due to the anxiety induced by our current political and health care climate. It was even starting to manifest itself in physical form – I’d had ongoing headaches and heartburn for weeks.

But then tonight, I met up with an old friend, and I had to summarize my life’s goings-on from the last year. I was initially worried I wouldn’t come off as happy. And even though I had to deal with a few disheartening circumstances, I surprised myself by feeling okay with how my life has turned out. I feel confident in my decisions and direction.

And maybe it’s because I got a little boost from the failed health care bill last night? But I do feel strong. I feel capable and excited for tomorrow. I have momentum.

It’s not because I magically discovered the key to eternal bliss. So, maybe happy is the wrong word? Like the zebra shark, I do feel I spend most of my days just banging into coral and coming up empty. I take a moment to breathe and re-charge. And then I do it all over again.

Why? Because some days I do find those sneaky small fish and crustaceans. And I feel fulfilled. 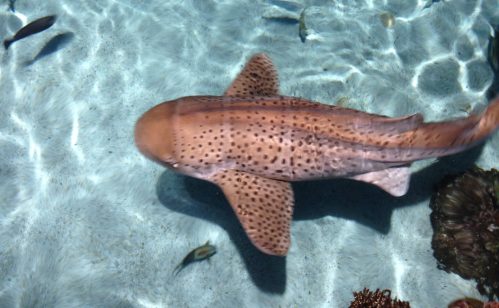