“Oh my god something shit on my bed,” I remember telling my roommate on the phone. I was living in the Little Italy neighborhood of Baltimore, and after an eight-hour day at my contractual position at the university, I came home to find a pile of poop on my $20 Target comforter. I was planning to move in a few days.

Of course upon texting both my roommates, they responded with inherent laughter. I didn’t think it was so funny. Once I removed the comforter and ruined sheets, I realized the shit had stained the actual mattress. I’d had this mattress since I moved into my first apartment four years prior. What did I know of mattress protectors?

“Did the landlord let her dogs in here? Why the hell would she let them shit on the bed and leave it?” I didn’t consider myself a bad tenant, but maybe I had done something to make her mad? I would have categorized this instance as beneath her, but I also knew she could be vindictive.

I considered throwing the comforter in the washer. God knows it had survived a few drunken vomit episodes. But nah, I was moving soon, and it didn’t seem worth the dry cleaning. I threw it in the trash. But what about the mattress? I had already sold it to the next tenant. What could I do?

I opened the window and sprayed some Febreeze. And then something came crawling out from underneath my bed, seeming completely terrified. A cat.

OH MY GOD. I texted with the picture. Both of my roommates laughed. But of course one of my roommates was deathly allergic so I tried to lure the cat out the front door without entering any of the other rooms in the apartment. Fortunately my bedroom was closest to the door.

I grabbed a plastic spoon from the kitchen and tried to push it out. How do you handle a cat? One of my roommates suggested grabbing a cardboard box. But what do I do with that? Just trap it? How the hell do you call a cat?

For some reason this cat trusted me, and as soon as it was outdoors, I grabbed my keys and shut the door. It immediately tried to jump back through my bedroom window, but I shut the frame so that only a crack remained. And then I remembered waking up in the middle of the night after feeling something jump on my bed.

It was the off season and cool enough to keep the windows open. I often slept with the window fan going, but there were no screens. The cat could easily have climbed in. But we lived on the second floor flat of a three-story building, and the entrance to the apartment was in an alley behind the building. How the hell did a cat jump in my window? It had never been a problem before. 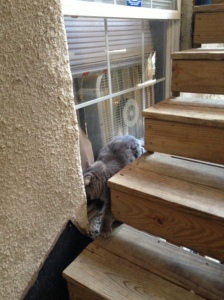 But I thought of the rats in the alley and shuddered.

And then this cat, scared and alone, just cuddled up next to me and meowed. I’ve never liked cats, but over the years I’ve had many friends adopt one and have since warmed up to them. I didn’t know what to do with it. It didn’t seem to want anything to do with the cardboard box I had brought out from the recycling bin.

It just sat next to me on the stairs leading up to the next apartment. I called the Maryland SPCA, but since they were closed, they wouldn’t pick up the cat. Their voicemail suggested Animal Control, but I worried they would just put the cat down.

One of my roommates and her boyfriend eventually came home, and we sat outside with the cat trying to figure out what to do. I couldn’t keep him. Our other roommate was deathly allergic, and our landlord charged an arm and a leg for pets. And while we discussed this turn of events, our neighbor from upstairs called down.

And sure enough the cat belonged to him. It was a stray he found near the docks where he worked and had taken it in. When his roommate went out for a smoke, the cat got out and apparently wandered down the stairs into our apartment. He’d been out looking for it most of the night.

We deduced the cat must have hid under my bed in the morning, and when I left, I had shut the window and my bedroom door so the cat had been stuck inside my bedroom for the entire day. I jokingly mentioned the shit on my bed, but he seemed too relieved to have found the little animal.

When they left, I felt something break inside me. I’d never owned an animal, but for an hour there I had taken care of something scared and in need, something willing to trust me with its life.

I’ve befriended many animals in my life, including doves and mice. But after that interaction, even among the shit, I decided I could no longer ignore the empathetic, nurturing side of my personality. I knew I would always be a good pet owner, and that I would love the opportunity to provide for something, but I never imagined the effect such a little thing would have on me. And I grew up with dogs.

It was another year before I actually adopted a cat. You know him as Norm. And as frustratingly menacing as he can be sometimes, he offers such joy and unexpected entertainment that my roommate and I often joke how boring our lives would be without him.

So thank you stray, forever unnamed, shit-on-my-bed cat for bringing Norm into our lives. And as for the mattress, I tried cleaning it, but I couldn’t completely remove the stain. So I just flipped it. 😉 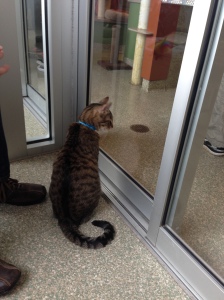 The first day I met Norm at WARL 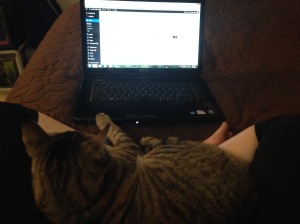