Basal and Bolus are my lifeline, but they’ve recently hit puberty, and their hormones and emotions are all over the place. This does not make life easier for me, and no matter what I do, they don’t listen. I guess I should respect their independence, but sometimes I miss the obedient rates that never questioned me.

I try to be the healthiest person I can be, but there are days when the diabetes takes over. It’s not necessarily a result of anything wrong I’ve done in managing it, but whether it’s stress or hormones, sometimes my blood sugar levels have a mind of their own.

In a State of Flux 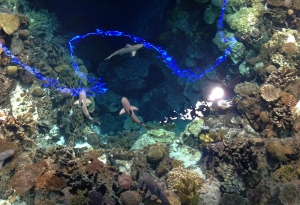 Yesterday was one of those days. Since I went off birth control six months ago, I’ve struggled to balance my basal and bolus rates (basal is the long-lasting insulin I take continuously throughout the day; bolus is the fast-acting insulin I take before meals). My insulin sensitivity is constantly fluctuating.

Maybe it’s because I’ve had this disease for more than five years, and my honeymoon phase is long over? Maybe this is what it’s like to really manage this disease? The constant ups and downs. There was a time in my life with this disease where I could set my basal and bolus rate to one number, and they would never change. That was an amazing time.

A Day of Lows

And yesterday was like any other day. Besides the fact Norm, my cat, woke me up at 5:30 a.m. and wouldn’t let me go back to sleep, I got up around 7:30. I didn’t have time to write so I headed into work and helped myself to a banana and a cup of coffee before my 9 a.m. meeting.

I then snacked on an apple and hard-boiled egg and around 12:30 p.m. I made myself a tomato and avocado sandwich. Then at 3:30, I took a few glucose tablets and headed to the gym located within my office building.

Due to some time constraints, I only committed to run 30 minutes on the treadmill, but about 15 minutes in, I could feel something was wrong. My blood sugar level had been around 130 before I started, but there was 0.2 units of active insulin in my system. It wasn’t much, but to be safe, I had eaten the glucose tablets.

That should have done it. In fact, due to the stress of the type of exercise, running usually makes my blood sugar climb so I should have been safe. I had taken Gizmo (my pump) off 30 minutes ago. But it didn’t matter – 15 minutes in, my muscles went weak, and my legs started to go numb. I checked Cosmo, my continuous glucose monitor, and my blood sugar level was 87, but I knew it was dropping.

And I didn’t bring the glucose tablets with me. So I had two choices: stop before I started losing vision or passed out or keep going until the weakness was overwhelming. Like a frustrated diabetic, I kept going. I was infuriated. The day had been stressful, and I just wanted to run for 30 minutes. I didn’t feel like I was asking that much, and here I was attempting to be healthy for my own body’s sake but my body wouldn’t let me.

So I used that anger, and I ran faster than I have since I completed physical therapy for my iliotibial band a few months ago. I pushed past an eight-minute mile and used the stress from the day and my emotions to keep my blood sugar stable. But I haven’t felt that kind of resentment on me in awhile.

Okay, not the most constructive cricitism and afterwards I reminded myself that I was alive, and this disease may or may not kill me. But I did feel 10 times better. So while it took years to overcome some of that resentment after I was diagnosed, this time I had used it to fuel a successful workout.

I stepped off the treadmill, breathing hard, and wiped the sweat from my forehead. I cleaned off the machine and checked my CGM: 73 and dropping. Time for some more glucose tablets. Yum!

One thought on “Basal and Bolus”