I didn’t have plans to adopt a cat on Black Friday of last year, but when my brother visited from Louisville and I mentioned the idea of stopping by the animal shelter on our way to the National Air and Space Museum, he seemed enthusiastic. He once owned a cat, too, but it was one of many valuables lost to Rochester in the break-up with his former girlfriend.

Most of my close friends know I have been wanting to adopt a pet for some time, but my previous landlord didn’t allow it, and before that, my roommate was severely allergic to cats. My friends would inevitably joke, “how’s the fish?”

Initially, I had planned to use a tactic from the movie 28 Days when one of the characters at rehab asked how much time is appropriate for entering back into a relationship afterwards. The fictional counselor recommended starting with a plant, then a pet, and then after some time, a human relationship.

I already had the plants, and since I couldn’t adopt a cat or dog, I thought a fish would be the logical next step. But there was something about not being able to touch the fish that didn’t appeal to me. So then I considered bunnies, but due to their destructive habits, my ex-boyfriend soon convinced me otherwise.

When I moved to the DC area, my new apartment only allowed cats. I was okay with this. Even though I grew up with dogs and I considered myself more of a dog person, after making numerous friends who owned cats, I had resigned myself to the idea of adopting one. I figured they were more cost-effective, required less maintenance and attention, and were much more independent than dogs. And they wouldn’t need constant interaction. Like me, they valued alone time. 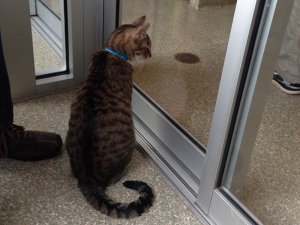 But I had yet to commit. When my brother came to visit, I thought what’s the harm in looking? We walked into The Washington Animal Rescue League after a 20-minute walk in 40-degree temperatures from the Fort Totten metro station. Many parents with young children were sitting in the lobby area, and I got a glimpse of the tiny black and white kittens in the picture window.

One thing was for sure – I didn’t want a kitten. I was overwhelmed by the cages in the cat room – how would ever I pick an appropriate animal companion from this sheer number? Keep in mind I haven’t been in a lot of shelters so this could have been a low number to begin with. But then I reminded myself that I couldn’t adopt anyway. I didn’t have the supplies at home, and I hadn’t driven to the shelter.

Matt initially picked a female tabby that reminded him of his former feline companion, Persephone, who he called Sephe. It was late afternoon, and we could tell this kitty had her feel of people. She’d been at the shelter the longest, and although loved by most of the staff and volunteers, she was extremely temperamental. She was not up for interacting with us, although I’m sure my brother enjoyed the reminiscent company.

“Do you have any male cats?” I asked the volunteer. She had pointed out some of the male cats previously, and I had my eye on a black cat. My friend once told me black cats are not adopted as frequently due to the superstition so I was determined to give them a chance.

But instead the volunteer introduced us to Normandy, a two-year-old, black and brown tabby. She put us together in a separate play cubby with glass doors and windows. Immediately, Normandy was all over us, rubbing against our pant legs and rolling over on his back. He even used the litter box in our company.

He was affectionate, loved to play, and didn’t mind being touched. His behavior, a reminder of the many canine companions I’d had growing up, won my heart. The more I talked to the volunteer about my concerns, the more at ease I felt, and the more ready I was to adopt.

I felt bad because Normandy had only been with the shelter for a few days, and many of the other cats had been there for weeks or months. But my brother reassured me.

“I know you want to do the right thing and give one of these cats a good home, but you can’t ignore connection. If he feels right, then you should adopt him.”

It didn’t take much convincing. The next day my brother helped me shop for supplies, and by noon we had picked Normandy up from the shelter and brought him home. I wasn’t sure if I’d keep the name. There had been a French theme going on at the shelter with a Marseille, Versailles, etc.

But as Normandy explored the apartment and kept me company on the couch, I started calling him Lil’ Norm, and it stuck.

It’s All About the Hair Tie

Two months later, Norm sits atop my bed (a fleece blanket and duvet cover in place to protect my down comforter). He’s more work than I anticipated. It took some time to figure out the whole litter box situation (I’m talking about me; Norm had it figured out in a day) and the appropriate diet. 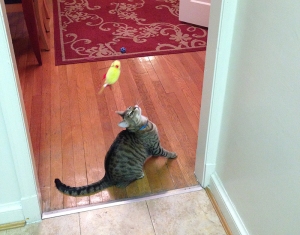 Norm and his bird

I’ve learned that he loves to dance (in my arms, of course), needs constant attention, and even though he may let me pet his belly from time to time, he will also bite when he feels like it. He likes to scratch up my carpet and the side of my mattress, and he’s envious every time I open the back door to do laundry. Ever since I took him outside and walked the block to the vet, he eagerly awaits the day until he can venture back outside and explore. He’s attempted to escape a few times for this very reason.

My roommate laughs because I often call him my “little attention whore,” but I say it in a baby voice. He has two beds and two access points for looking out the window. I once set up a cat camera to see what he does all day, and surprise, surprise, he mostly sleeps on my bed. I think he loves my bed more than I do.

And then there’s the bird. Over the holidays, he was showered with gifts. My aunt, who has had cats most of her adult life, gave him a bird tied to an elastic string that hangs from a door frame. It didn’t take Norm long to pull the bird from the string. I have now tied the string around the bird’s neck so he can’t get it free, but now it looks like we’ve hung a dead bird between our kitchen and dining area.

He often gets the bird stuck on top of the fridge or tangled around my roommate’s food processor (we used to keep the alcohol there but quickly learned that was asking for trouble). There’s a certain meow he makes when the bird is stuck. I’m still learning the others. 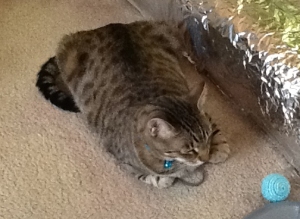 Norm sleeping with his hair tie

But out of all the toys he’s received, he loves my hair ties the most. He likes to play fetch, and sometimes I wonder since I grew up with dogs if I’m not half-training him to be a dog. Usually when I’m sitting on my bed or preparing to leave in the morning for work, he’ll drop a hair tie at my feet (I’ve had to learn to hide the ones I actually want to use, but I’ve sacrificed a few for the cause).

I then sling-shot the hair tie across the apartment, and Norm runs after it. Sometimes, he’ll wait, and watch wear it lands. He then crouches down, backs up, and pounces (as if the hair tie is going to move further). But whatever makes him happy.

It certainly makes for an easy and cheap toy. He collects hair ties of all various colors and sizes. They currently clutter our apartment, and I recently found some collecting dust under the rugs, the stove, and my bed. But it’s not always enough for Norm to have his hair ties and bird.

As I write this, he’s sitting at my feet waiting for the moment when I will put down my headphones and toss the green rubberband near my desk. I never anticipated having a cat that required this much interaction and companionship, but when he stares at me with those brown eyes, big with excitement, how can I resist?