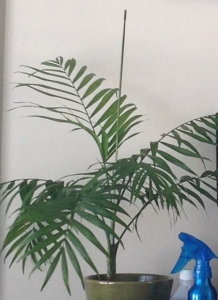 I stare at what remains of Phoenix, my first and oldest house plant, an Areca palm, now leafless with two short stems and a root practically broken in half. I stare at Norm, my first cat, a two-year-old, who’s been meowing at me since 5am, probably to show me his green reward.

I am reminded of what my roommate said yesterday, “Whoever thought you would have to choose between your plant and your cat?” I had cradled Phoenix in my arms then as Norm had already attempted to cut off its circulation. This apartment seems to be a death wish for houseplants. Out of the six I moved here, only two remain. But I thought for sure Phoenix would be one of them.

This plant has been through everything with me from moving into my first apartment, going back to graduate school, ending my first long-term relationship, and then ending my second. I know I shouldn’t look so much into it, but its presence has always been a staple in my life, and now it’s evident whatever life remained is gone.

How many times have I done this in the past six months? I try for as long as I can to save the green, but there comes a point when I must recognize there is nothing left saving, and I return the crumbled roots back to the Earth.

A good friend once told me that life is a series of start-overs — that instead of making one choice for one track, we make many and constantly change tracks. I don’t know why I never thought about this. It certainly helped when I thought the last start-over was a failure on my part. I still don’t feel like I have completely succeeded, but do we ever?

Just yesterday, I made the choice to get up at 6am. I did some reading, answered some queries on my online dating profile, and finished most of my errands before noon. I spent most of the day cooking and even had time to pop some easy peanut butter cookies into the oven. By the time 4:30 rolled around, I was twiddling my thumbs.

By getting up early, I had given myself an additional five hours. I never had this much time on Sundays. Usually, I spend the majority of it preparing for the week and attempting to relax before Monday. But on that day, I had jumped out of my routine and been out among the world at hours I’d usually be sleeping. I made connections I normally wouldn’t have the opportunity to make.

Now none of this is life changing, but it’s amazing to think how quickly our track can change with one choice. I’ve often considered this when thinking about relationships. Neither of my long-term relationships were on my daily track. I made a choice that led me to an opportunity to meet them.

I don’t believe in everything happens for a reason, but I have also come to realize over the years that there are some things out of your control. This isn’t to say I don’t have some say or choice to make in the matter. And sometimes I’m okay skipping a social invitation because I’m tired and not feeling up for a series of small-talk conversations. But then there are times when I open myself up to a conversation with the grocery cashier or smile when the Whole Foods stocker asks if I need any help. These seem like small things, but they are still efforts on my part.

And it’s not like this small connection with a stranger is going to make a huge difference in daily routine, but it does bring life to an otherwise windy and cold day. And sometimes conflict. Yesterday as I was checking out at Whole Foods at 10am, I tried to hand over my basket to the cashier. Her English wasn’t great, but she was trying to instruct me to pull out a platform underneath the counter to rest the basket on.

It took me about five minutes to figure out what she was asking, and then another five minutes to pull the tray out. This is not unusual for my anything-but-mechanical self, but I was embarrassed by this scene since a line of people witnessed my fumbles. I’m a self-conscious person and even though I don’t care what other people think, I do care about looking stupid in front of strangers and bringing attention to myself.

The cashier had also reversed the order of my reusable bags so that the heavier items were being placed in the more flimsy bag. I didn’t say anything but when she rung up my eggs, I asked for them so I could put them in a separate bag. She tried to show me her method of protecting them, but at this point, I was annoyed by the whole scene and just asked for the eggs.

She then proceeded to hand over both bags for me so I could bag everything. I threw things around so I could pay and leave, and then on my way out, I stopped at the café and reorganized my bags. Now she probably didn’t mean to be snippy — it was probably just the language barrier that made her seem frustrated with me.

But in turn I also seemed frustrated with her because I was self-conscious and embarrassed by the whole exchange. I shouldn’t have taken things out on her, and maybe she was having a rough morning and was taking things out on me? It’s hard to say, but these aren’t thoughts that were going through my mind at the moment.

Yet the encounter stayed with me. I was annoyed the whole metro ride home. I regretted getting up early and going to Whole Foods. If it had been like a usual Sunday, I would have never met that woman. But it didn’t matter. That was a choice I had made, and it could not be undone. Even though it took me longer than the average person to calm down and move on, I did.

Now I know how to use the pullout tray at Whole Foods. And now I know when there’s a language barrier, I should be more communicative. Maybe I should also just bag my own stuff? Or make an effort to trust the cashier. In my experience, Whole Foods cashiers are one of the few who know how to bag their stuff. And they’re pretty damn efficient.

It wasn’t until after 5pm, having just completed some Pilates exercises (something else I wouldn’t have done had I not gotten up at 6am) that I noticed Phoenix hanging by a root. It was Norm’s first of a final attempt at mauling my plant. I was furious, but how could I really communicate to this cat that what he’d done 20 minutes ago was wrong? We were still learning to speak each other’s language.

He sat nearby hunched over his food bowl. I attempted to salvage the drooping plant with some string. Most of the long stems are now gone, but the string remains.