I wouldn’t say it’s been an easy two months. As much as I’ve tried to focus on the positive and take the space for recovery, there is a lot of healing to be had. Happiness is a fleeting moment. The toxic stress of uncertainty lies underneath its glimpses of hope.

But as I’ve told countless family and friends, even with this drastic change, my life now holds more meaning than it did just a few months ago. My everyday feels meaningful, even without purpose. Because for the first time in the societal reigns of financial liability, I am free to just be and re-learn all that once defined my childhood joy.

That doesn’t mean I’ve forgiven myself for getting into certain situations. This is part of my healing journey, and as my best friend so aptly reminded me, often a symptom of trauma. We blame ourselves more than the abuser, and it’s a cold, little heart. But rather than focus on the trauma, I choose to focus on the frame of opportunity.

Some days are easier than others, but just a few weeks into this new path, Norm – the six-year-old tabby that continues to astound me with his resilience – gave me a window of hope.

I decided to let Norm roam free on the car ride to the vet. His allergies had been acting up again, and the lesion on his arm had yet to heal. I figured he’d sit in the back and be more relaxed out in the open. We could all benefit from a sense of freedom.

But Norm spent the car ride wailing out the backseat windows, at a volume much louder than usual. Passersby must have thought he was being tortured. At one point, he even climbed into the trunk of my hatchback, sitting calmly on the cover, with his front paws tucked under his chest. I can only imagine what he looked like to drivers behind me.

When I came to a stop, the cover broke loose, and Norm fell into the trunk. He immediately got up, resilient as ever, and climbed into the backseat. I shook my head and hoped the rest of this 30-minute ride would go quickly. We were about 10 minutes from the vet, and I was paused at a stoplight. I heard a “vibration” sound and turned around to see Norm standing near the right rear passenger side window.

His paw was on the automatic window latch, and the window was rolling all the way down. He just stared into the open air, as if amazed by his own magic. I took the opportunity to grab his neck and pull him back, just in time to roll the window back up from the driver’s side and step on the gas as the light turned green. I had thought to child proof the doors, but never the windows.

Norm, a bit terrified by his own brilliance, remained cowered on the floor of the backseat until I was able to pull over and put him back in his carrier. By the time we reached the vet, he was panting from all the activity. I was just relieved we had survived. But on the entire way home, I couldn’t stop laughing at the fact that Norm, my six-year-old tabby, had rolled down the window.

In that moment of enlightenment, Norm was both surprised and terrified by the world beyond that window. And with his hesitation, I was able to save (or imprison, depending on how you look at it) him from certain demise. Norm had a choice, and maybe his animal instinct encouraged him to preserve the safety net of his domestic life?

But when I was presented with the same window, I wasn’t given a choice. I was respectfully asked to make my exit, and then I had to choose what to do with this new world of opportunity or demise. If I had known what was to come of this path a few years ago, I may not have chosen this direction. But then I may not be the resilient, emboldened leader I am today.

Life circumstances are not always optimal, but there is no living in discontent. There is only overcoming that which poisons us little by little and finding the serenity that melts that cold, little heart. 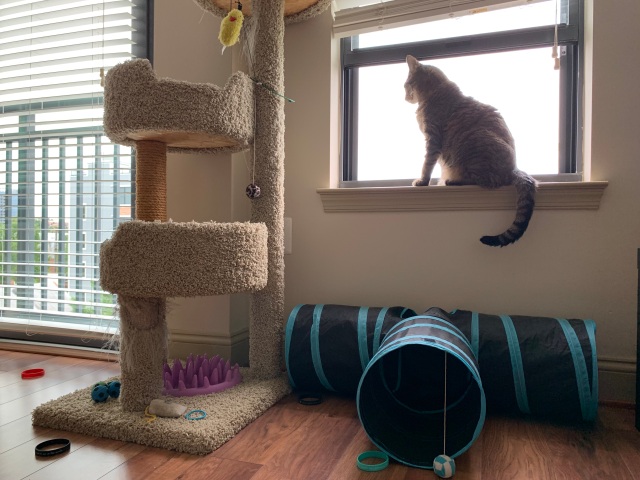 5 thoughts on “When One Window Opens”