A few days ago I moved out of an 850-square apartment into a 1250-foot one. I was paying $1,000 a month for that 850-square apartment (utilities included) with a roommate. I moved with that same roommate (also one of my best friends). There were times when I would get down on myself in DC thinking of how much I thought I had failed. And then I would remember that I had a roof over my head, that I wasn’t always living paycheck to paycheck (when my medical insurance or my health wasn’t being annoying), and that technically I was living comfortably.

And then I moved.

What the fuck was I talking about?

I mean sure I could buy a house somewhere in this country for the amount I am spending on rent but would I make the same amount of money elsewhere? I have to admit my job pays pretty well for the work I’m doing. It’s amazing the difference 400-square feet can make.

So the moral of this story? I was so wrong when I said I had failed DC. DC had apparently failed me. There was so much more to life than that 850-square foot apartment. And yes I had good memories in that apartment – memories of a simple, cramped life, but one that I still made the most of.

This apartment is 10 times better, and when I first met my roommate in our new home upon moving in, we both silently screamed because we realized how much better it was, and how much we would enjoy calling it home. It doesn’t mean it’s perfect. There’s a metal plate on the road outside our apartment, and each time a car drives by it makes an exceptionally loud noise but it certainly beats the drill outside of our former apartment courtesy of the two-year-in-progress construction site literally right outside my bedroom windows.

I am sure there are apartments and houses better than ours. I know I could invest in a house somewhere for the amount I am paying for rent here. But the point is this apartment is not just better than my previous living situation, it is so much better it makes living here that much more enjoyable.

I never gave much stock in a home before because renting is for suckers and I hope to be an owner one day but there is something to having a good home situation. My roommate and I have lived together for two years now. We’re more than just roommates. We’re best friends. We often joke we’re like a married couple without the physical relationship.

For those of you who know me I can’t wait for you to see it. The sun… the stars… the quiet… the wine… the space… the joy… when you find a home that fits it brings such a smile to your face there’s no turning back.

And for those of you who really know me, did I mention it’s a sustainable living complex? Insert winky face here.

As for Norm he wailed on the entire way to the new apartment but given the additional space (and the half-closet he owns), I would say he’s adjusting quite well. 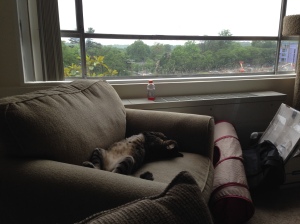