I recently bought a scale… to measure my weight… over time. 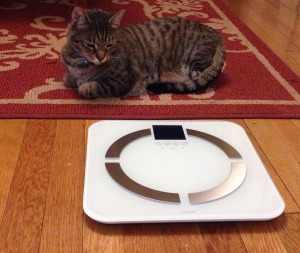 But every time I come to grips with my single status again, I need something to focus on whether that be my writing, my work, or my fitness. Four months ago I started building muscle. I didn’t have much of a strategy. I just started lifting weights and varying my exercise routines.

And then I did gain muscle. I could feel definition in my biceps and abs. I could do things in yoga I’d never been able to do before, and I ran my fastest mile… ever. So I thought if I just put a little more thought and energy into it, I could actually be fit. Okay fitter.

So I’m giving myself 5 weeks (only because after 5 weeks I’m taking my first week-long vacation in five years). See what I can accomplish with a strict regimen. I am a perfectionist after all. But that’s the catch. I have body image issues. I used to struggle with different types of eating disorders. I haven’t had a scale in my home in more than 10 years. The counting, the weighing – it encourages my obsession with an unrealistic body image.

Just a few weeks ago I decided I would try a full-form push-up. I hate push-ups. I usually cheat and do the “easy” version. But I’ve been doing pilates, yoga, and strength training for five months now so I decided to give it a shot. My pilates routine only called for three full-form push-ups. I did all three. I couldn’t have handled more than that, and the next day I could only do one.

But for the first time in my life, I did a full-form push-up. No wait I did three full-form push-ups. Now pull-ups and chin-ups – still working on those. But I like feeling strong. I like feeling as a young woman alone that I can take care of myself. I like going to Costco with my roommate and being able to pick up the heavy packages and load them onto the cart. Just because I’m feminine doesn’t mean I’m weak.

Last week I started playing around in the weight room at the gym. I had some help. I don’t want to pull anything because of bad form. But I took a stab at the bench press. I admit I felt pretty cool even if I was only lifting 45 pounds. But for all the running I do I totally failed at the leg press. My personal trainer kept telling me to “push,” and I oddly had flashbacks to the Ob/Gyn exam room.

I’ve been counting calories for a week and a half, and in order to gain muscle I need to keep up my base metabolic rate so I know there’s a calorie amount I have to consume on the daily. There’s no undereating. There’s no starving myself or throwing up after a binge. This has nothing to do with my body image. It has to do with my health and how I feel about myself.

When my scale arrived, I left it in its box for a day. I was scared of what it would turn me into, and I wasn’t sure I was ready to take that first step. But the next morning I unveiled its contents and stepped on board. At first my weight was four pounds lighter than what I’ve been seeing at the gym for the past three months. And instead of smiling at the idea of losing four pounds in a week, I thought that’s not accurate. I know I have more muscle than that.

I eventually got it right, and I feel good about it. My weight is exactly where it should be. I imagine it will fluctuate a bit as I become leaner but not so much as to be unhealthy or unrealistic. That scale currently sits under my nightstand out of view. I even had fun weighing the cat (he’s a bit of a fatty however much we try to keep him in check).

A couple of years ago when I was enduring a terrible commute and an unexpected life transition, I weighed 10 pounds lighter than I do now. Most of my clothes were falling off of me. But I had no muscle strength. That’s not where I physically want to be. I may be heavier now but I am happier with my body. I worked hard for this body. I don’t take it for granted.

But that’s not the only key to a healthy body image. The key is being happy with yourself. Sure I still have fat pockets some places and areas I could afford to trim. But you know what? They make me thankful that even with diabetes I can still have those fat pockets. I’m not starving myself to survive. I am alive and well and able to monitor my diet and exercise to have the body that I want – a body that I can be happy with. I don’t need to be an Olympic runner.

I just need to be happy with my own capabilities. I don’t need to run a six and a half minute mile. Eight minutes works just fine for me. I don’t need to do that bird-like pose in yoga. The fact that I can hold my entire body weight on my palms and the tops of my feet is just enough. I don’t need to bench 100 pounds. One push-up is quite a feat. I recognize my limitations.

And maybe I could be that Olympic runner if I really wanted it? Or maybe my body is just not capable of such an achievement?

I think I’m okay with that.

One thought on “Today I Bought a Scale”