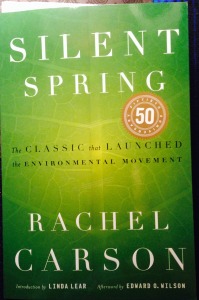 It should be amazing to me that in the six years since I’ve been diagnosed with Type 1 diabetes and the four years I’ve been involved in the sustainability movement, I have yet to read Rachel Carson’s Silent Spring, a classic for environmental health advocacy. This is the book that catapulted events leading to the establishment of the Environmental Protection Agency and the ban on the production of DDT (the effects of this chemical are sadly still with us today).

And yet it was published in 1962 by a woman. That was more than 50 years ago, and I admit Carson might appreciate that we have taken her words to heart, but she would probably be disappointed with the amount of toxic chemicals that still plague our homes and health statuses.

Even though my chronic disease is “autoimmune,” my body showed no evidence of this fact. And even though my doctors tell me it’s probably genetic, I have no family history. The media and scare over the diabetes epidemic would have you believe it’s my fault, but I’ve always taken good care of myself and have always been in good health until six years ago.

So there is really only one explanation (in my mind) for my disease and the sudden appearance of Type 1 diabetes in not just children but adults, too, with no family history and no genetic precursor. There is something wrong with our environment. And we are doing it to ourselves. That’s what saddens me the most.

Although I try my best to make this world a better place for me and our children, I am sailing against the winds. Research continues to point to the public health devastation of environmental toxins. It should be common sense, right? But how can we make a difference when the entire production of our society depends on these chemicals?

I usually shy away from this topic because I get too passionate about it, and most people don’t understand what I’m really trying to say or shrug me off as “one of those.” When I lived in Baltimore, I felt like I met people every day who understood these issues, but here in DC, I feel alone. And I’m surprised. I would think that DC, a major metropolitan, would have more resources to implement the kind of change we need to change our culture and our world.

There are certainly groups who are dedicated to such a cause, but they’re little pockets of a bigger ocean. And they appear to be easily eaten up in this ecosystem. So even though I work in health policy communications, I figure it’s time to re-dedicate myself to this mission. My disease is not getting any easier, and to keep myself distracted, I feel like I need to be contributing to something greater.

But before I can step out the door and be an advocate, I feel like I need to educate myself a little more (ah, the hidden researcher inside me). So I’m going back to basics, and I’m starting with the book that they say launched the environmental movement. Let me tell you, it’s not going to be easy.

I started reading the first chapter in public today and had to hold back the tears. Carson begins with an image of a community: “There was once a town in the heart of America where all life seemed to live in harmony with its surroundings.”

She goes on to explain strange happenings: “mysterious maladies swept the flocks of chickens; the cattle and sheep sickened and died. Everywhere was a shadow of death. The farmers spoke of much illness among their families. In the town the doctors had become more and more puzzled by new kinds of sickness appearing among their patients … There was a strange stillness. The birds, for example – where had they gone?”

At the end of the chapter, Carson explains that this town is fictional, but many of the events she describes have happened or could happen to any town in America.

And I cried because 50 years later, this is still true.