I woke up at 2:30 a.m. shaking, while Cosmo, my continuous glucose monitor (CGM) vibrated and beeped at me from the nightstand to my right. I pushed its button, acknowledging the warnings, and saw the screen light up with the number 45.

I didn’t need to check my blood sugar level with my glucometer. My heart was pounding, and the room was blurry. I thought of the orange juice in the fridge but decided to go for the Reese’s egg in the freezer. I knew from recent calculations that this chocolate-covered, peanut-butter filled egg contained 25 grams of carbohydrates (mostly sugar).

That should do it, I thought. Norm, my two-year-old tabby walked into my bedroom and sat on the floor in front of my bed with a quizzical look. The egg didn’t feel like enough even though I knew it was. I checked my insulin pump, which confirmed there was no active insulin in my system. My basal rate was set to decrease from .600 units to .400 at 3 a.m. to account for those middle-of-the-night lows.

I knew I would be okay, but I was still shaking, and my heart was pounding. My body felt weak and depleted, and I craved sugar – the sustenance necessary for instant energy. Earlier that day I had made the mistake of buying a few bags of Reese’s pieces eggs, now 50 percent off in the post-Easter haze.

Easter Only Comes Once a Year 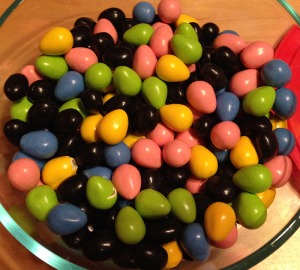 Even though I was aware I would probably devour these eggs in a few days, I thought Easter only comes once a year, and after this, there will be no more eggs for me to buy. I considered how well I had been doing. A few weeks ago I stopped stocking up on peanut butter cookies and dark chocolate peanut butter cups at Trader Joe’s for my nightly sweet tooth cravings.

I started running every day, and without the added processed sugar, I felt less sluggish and more in shape, although the addition of intense exercise completely depleted me. But this past week with the conscious decision to re-introduce sugar into my life, if only for a week, I immediately felt the sugar blues return.

The daily change in pressure from winter’s departure and spring’s welcome added vertigo and sinus headaches to the mix. Overall, my body was not doing well this week. And after practically eating an entire bag of Reese’s pieces eggs yesterday before my run, I decided I needed to cut sugar again.

But I didn’t. That night after my dinner of homemade vegetable soup, I indulged with more Reese’s pieces eggs. I finished the bag and took enough insulin for 150 grams of carbohydrates over a two-hour period. By the time I went to bed, I only had .900 units of insulin in my system, and my blood sugar levels had remained stable (stable for a diabetic is anything between 120 and 200).

I was impressed, and because sugary items usually caused a spike in my blood sugar even hours later, I assumed the .900 units would get me through the night. That they did, and then some.

Norm laid on my duvet cover and watched as I devoured another half bag of Reese’s pieces eggs. I felt horrible, but I couldn’t stop. My heart still felt like it had an additional weight on it, and the shakiness was slowly subsiding. Finally, I looked at Cosmo, and it read 68. Not quite normal, but it was stabilizing. I put the bag down and realized in addition to the first 25 grams of sugar I ingested, I had probably ingested another 100 grams.

Even though I was no longer low, I knew the highs would come now. So I moved Cosmo closer to me and set my insulin pump to deliver enough units for 100 grams of carbohydrates over the next hour. I was still sweating from the sudden drop, but I fell asleep immediately.

When I woke at 8 this morning, I felt groggy and depleted not only from the drastic changes in blood sugar levels over the past 24 hours, but the amount of calories I had consumed from the Reese’s eggs alone. I checked my blood sugar, and it was stable at 94.

I wasn’t necessarily surprised, but in a lot of ways, I got lucky. I know my body better than anyone but that doesn’t mean I always make the best choices. And even though I believe as a diabetic you can’t always be perfect and by no means should you expect yourself to be, there are certain things I must avoid for the sake of my health. The consequences just aren’t worth the risk.

And in this case, it was apparent that even though I’m allowed to enjoy my peanut butter cookies and peanut butter gelato every now and then, the delicious Reese’s Easter eggs were officially off the table.