The vibrating wakes me up for the third time this night. It’s 3 a.m., and my new continuous glucose monitoring system (CGM) says my blood sugar reads 55. I know it’s a lie. I recently checked my blood sugar, and it was stable at 93. I have no active insulin in my system, but I just started this CGM, which I have decided to call “Cosmo,” and the nurse said it may take a few days to reflect my actual blood sugar. It’s a shame, but in the few weeks that I’ve had Cosmo, I still won’t give it up.

In the almost five years that I’ve had Type 1 diabetes, I’ve thought about investing in a CGM, which uses a sensor to monitor my blood sugar 24/7, but there can be a 20-minute delay since it’s reading my glucose levels from the interstitial fluid (a thin layer of fluid that surrounds the body’s cells), as opposed to a glucometer that reads it from a blood sample. I’ve always erred on the hypoglycemic side – two seizures in my short history as a result.

But in addition to the added expense of a CGM (my health insurance history has not been very consistent), I didn’t know if I wanted a 24/7 reminder of my diabetes. I wasn’t sure I really wanted to know how much two pieces of bread or pasta or ice cream affected my blood sugar in the three hours I didn’t check it with my glucometer. Even though by the time that three-hour period had passed, my blood sugar returned to a normal state of 80-120, it didn’t mean that in that time, it hadn’t spiked to 300 and come back down. Did I really want to know that?

With my current daily five-hour commute, I was checking my blood sugar seven to 10 times per day and still unsure of where it was while I was on the metro, then the train, and then on the one-mile walk home. It scared me when I arrived home, and it read 68, and I had no idea. I ate snacks on my commute; I decreased my basal rate; I turned my pump off; I took less insulin when I ate. But sometimes, no matter what I did, it dropped below 70. I needed some peace of mind.

Because of my many lows (my recent A1C came back 5.3), it wasn’t hard to convince my insurance company and my doctor that I needed a CGM. When Cosmo arrived, I waited till the weekend to test it out. I read the entire user manual before I installed the sensor beneath the skin on my stomach. Of course, I somehow still screwed up the process and luckily was able to acquire a replacement sensor for the one I damaged. Whoops. Apparently, I’m not the only one who messes up removing the needle from beneath the skin without taking the sensor with it. That eases some qualms on my part. But I had no problem inserting the wireless transmitter.

Now, I have to check my blood sugar at least twice a day to calibrate Cosmo. But I usually check it more often to account for its accuracy – I’m sure with time, it will become easier. I carry the receiver with me everywhere I go, even in my back pocket on the way to do laundry. I always want to know what my blood sugar is. I’ve already started changing my diet, staying away from processed carbohydrates that make my blood sugar spike past 200 post-meal. I was always against restraining my diet because of diabetes, especially now with an insulin pump, but when I saw what certain cereals and granola bars were doing to my blood sugar in that three-hour post-meal period, I stopped eating them.

I’m not saying I will always be good. I still like my ice cream and have indulged in a few Reese’s peanut butter eggs, my favorite candy this time of year. It’s nice to see my staple dinner diet of veggies and rice doesn’t affect it too much either. I don’t think I could totally embrace the “paleo” diet. Cosmo has even saved me from a few serious lows. I was in a work meeting when it started vibrating. I opened the receiver, and it read 68 and dropping. The CGM also provides trending arrows to give me an idea of whether my blood sugar is stable, going low or high.

Usually, if I started feeling shaky during a meeting, I would just wait it out and take care of it when the meeting ended, but knowing there was still active insulin in my system, and it was dropping, I excused myself and drank some juice in the kitchen. Just a few weeks ago, I had barely escaped a meeting with a blood sugar of 41. Cosmo helps to make sure those type of instances don’t happen anymore.

Another perk or downside to Cosmo is the trending graph feature. I can view the rise and fall of my blood sugar over a 24-hour period. Below the red line means it’s low (below 80), and above the yellow line means it’s high (above 200). I was surprised when a few days ago, I looked at this graph, and my blood sugar stayed between 80 and 200 over a 24-hour period. I couldn’t stop smiling not because I was proud of myself, but because I actually felt normal, like my body was finally working with me instead of against me.

When it wakes me up at 3 a.m. with a blood sugar reading of 55, I do not cringe. I would rather it disturb my sleep than for me to have a seizure or slip into a coma because my body did not wake me up in time. Not that this has ever happened in the almost five years I’ve had diabetes, but it gives me peace of mind. Right now, it reads 172 and stable. Nobody’s perfect, and I smile because it stays beneath the yellow line. 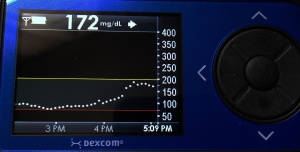 4 thoughts on “Say Hello To Cosmo, My New CGM”